Greetings from -“almost there!”

This voyage has been perfect. That seems to be the best way to describe it. The weather has been excellent. I have only experienced two good squalls and the rest of the time it has been warm sunny days and star lit nights. At no time was even a light windbreaker, or any warm clothing needed. Not even at night …and  wow! The night skies were incredible. 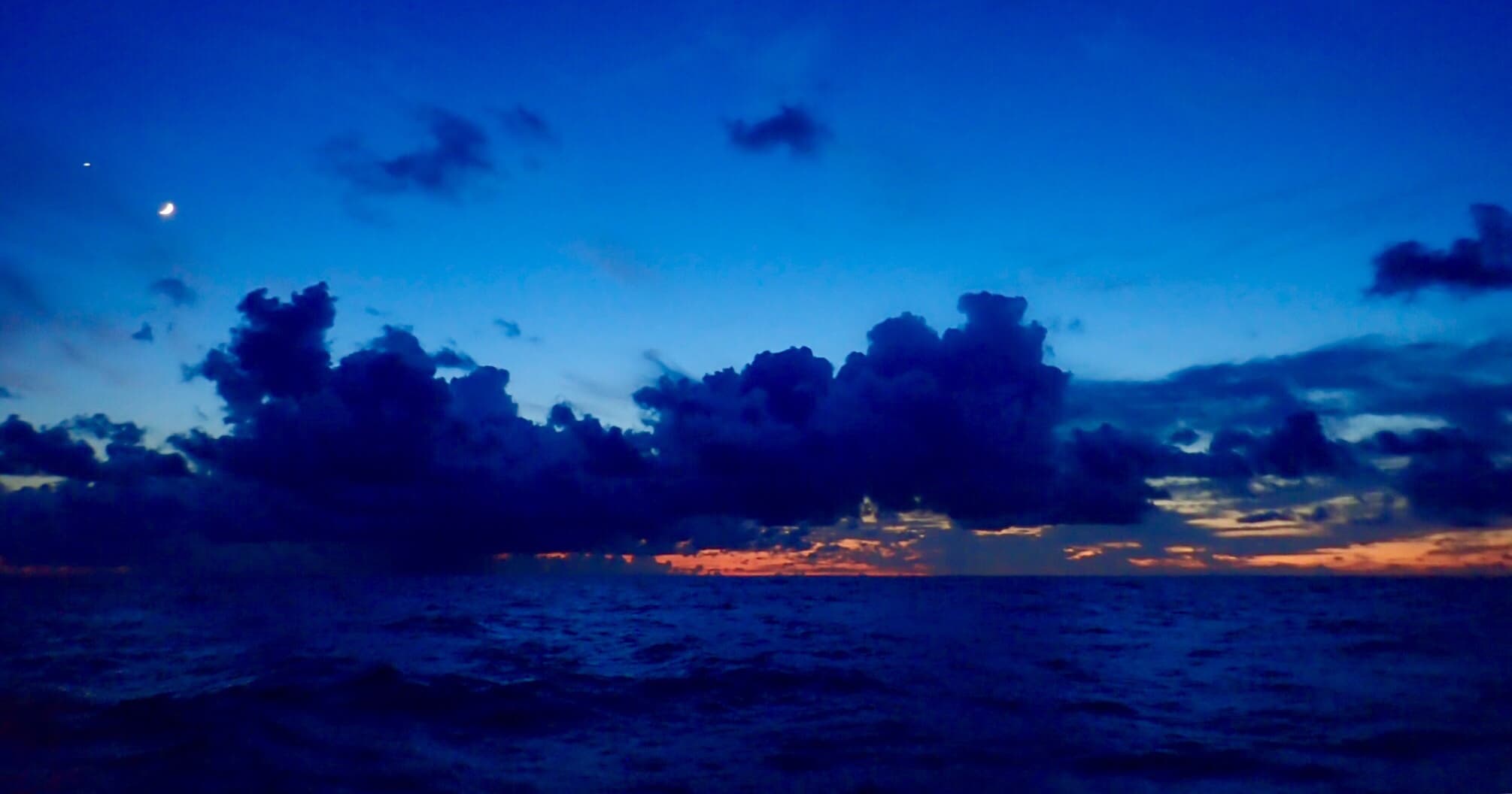 On moonless nights, or after the moon set, I could clearly see areas of different star density within the Milky Way. It was just like the images I would see when pointing my iPad Stargazer app at the night sky. Also, at night the navigation lights on Oh! attracted the sea birds, especially the white stern light. It was fun to watch them swoop and dive around the stern in and out of the light. As I get closer to the Azores, during the day encounters with pods of Dolphins are becoming more frequent, and multiple whale spouts have been seen, including 2 huge breaches as the whales leapt out of the sea. In the Azores high, the wind dies and the seas are calmer so sightings are more frequent, simply because they stand out better in the calm flat water.

The goal for Oh! however, was to sail around the high pressure area and just stay along the light wind fringes. I am proud to say I have literally sailed the entire distance ( so far ) from Bermuda. The engines have been used only  6 times. Twice to charge batteries while in neutral (stb engine with the snarled prop), and four times to briefly hold Oh! into the wind while I had to raise, lower, or change the reefing on the big mainsail. (Port engine with functioning prop).

To sail the entire route without any motoring  is a fantastic feeling.

Some may wonder, isn’t it boring? The answer is an emphatic “not in the least”. There is always either something stunning to see, or routine chores to do. I have more to keep me interested and occupied, than I can possible get done each day. Plus, when you need to nap every few hours, time goes by very fast.

I also have a fascination with clouds. Partly from my enjoyment of soaring where I need to “read the clouds” to find lift, but also from the physical science side. What causes that type of cloud to form there, while a totally different cloud type is forming in another direction? Or, for a more directly applicabe reason; to determine if there is a pattern to where the massive cumulous and cumulonimbus clouds finally collapse in a fury of downdrafts and rain. Cloud gazing on the open sea fascinates me. I know, I am a bit strange, but anyone who hasn’t observed that by now, probably hasn’t been paying attention!

Would I ever do a long solo passage again? Without hesitation, the answer is a resounding, “yes!”.

Now I fully understand what drives people to do solo voyages.

It is so liberating and stress free. My daily routine is dictated only by the weather, myself, and the decisions I make. With only a few exceptions, there are essentially no other external pressures or inputs to deal with. No traffic, no crowds, no meetings, no personalities and no conflicts. The challenges are

A) Working with the forces of nature, or

B) Dealing with routine, or unpredictable mechanical issues.

Surprisingly, even those unpredictable issues are not stressful – they just become another item on the boat “to do list”, which is a constantly changing and growing list of priorities and wishes. So far, on this voyage the mechanical issues have been,

3. Bilge pump lines that were installed without anti-syphon loops that trickle water into the bilges,

4. A broken mainsail outhaul line, probably due to chaffing on a worn pulley, and

5. Two pop rivets that have broken around the gooseneck on the boom. These were due to internal corrosion and simply appear to be failing with age.

All pretty minor stuff, with nothing threatening to my safety, or the  seaworthiness and integrity of Oh! that cannot be dealt with.

Working with the forces of nature has been the most intellectually challenging, interesting and rewarding part of the voyage. I made a plan right from the start to record daily screen shots of long term weather forecasts and what really happened as the voyage unfolded. The plan was to create an ebook of the voyage while sailing. My mistake was not setting up the ebook template before leaving Bermuda. That requires a substantially better internet connection than IridiumGo!.  So, that project is deferred until arrival in Flores, but I have the material saved.

The day to day analysis of forecasts and working with the dynamics of constantly changing weather and seas has been interesting and rewarding – especially since I have no deadlines – none. So… if I want to change course to take a route closer to the center of the Azores high to get calm seas and gentle  sailing, but is slower- I can.  That luxury of having almost no “time restrictions” is truly liberating. I can make water, have plenty of fuel, and enough food for months. The only real forces driving decisions are;

1. Personal enjoyment of the voyage and,

2. Safe routing to avoid as best I can weather and any rapid change in the weather to a system that might be threatening or dangerous.

Along the way I have had plenty of time to work on Oh!, see areas that need attention and consider some “what if scenarios” and the resources I have to deal with them.   It has been a great working classroom for preparing Oh! for future voyages. Plus experiencing the many rewards of long solo passages, is something that is really special.

The voyage has gone so well, I really don’t want it to end.  However, a new adventure awaits in Flores, where I anticipate dropping the anchor on Tuesday morning!

I hope everyone is well.